Necktie
A necktie (usually just called a tie) is a long piece of material worn around the neck and under a collar with a knot tied in front. The modern necktie’s original name was the four-in-hand tie. The modern necktie, along with the ascot and the bow tie, are all descended from the cravat. They are mainly worn by men, though they are sometimes worn by women, either as fashionable dress wear or as part of a uniform.

Cravat
A cravat is the neckband that was the forerunner of the modern tailored necktie. From the end of the 16th century, the term “band” applied to any long strip of cloth worn round the neck that was not a “ruff”. The ruff itself had started its career in the earlier 16th century as a starched and pleated strip of white linen that could be freshly changed to keep the neck of a doublet from getting increasingly grimy, or for use as a bib or napkin. A “band” could indicate a plain, attached shirt collar or a detached “falling band” that draped over the doublet collar. 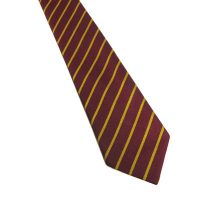 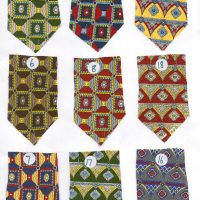 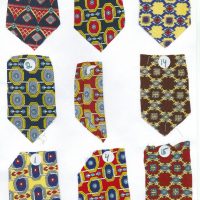