A flag is a piece of coloured cloth flown from a pole or mast, usually for purposes of signaling or identification. Flags were initially created for signaling, such as semaphore, and for the identification of those who displayed them, and are still used for that purpose today. Flags are also used in messaging or advertising, or for decorative purposes, though at this less formal end the distinction between a flag and a simple cloth banner is blurred. Generally, a piece of cloth is a flag if it is flown like a flag, with one side attached, though many flags are recognizable if displayed in other forms. Flags are usually rectangular in shape, but may be of any shape or size that is practical for flying. Named shapes include square (e.g., the national flag of Switzerland and the state flag of the Vatican City), pennant, double pennant (e.g., the state flag of Ohio), swallowtail, triangular or swallowtail burgee, gonfanon and oriflamme. A more unusual flag shape is that of the flag of Nepal, which is in the shape of two stacked triangles. 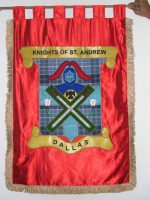